Valley Fever – What You Need To Know

Valley Fever is an often heard term for those of us who live in the desert southwest, but what do you really know about this common disease?

A Brief Overview of Valley Fever 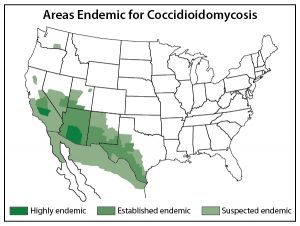 Map courtesy of the CDC. It is based on studies performed in the late 1940s & 50s, and also on locations of more recent outbreaks/cases. Valley Fever might also live in similar areas with hot, dry climates that are not shaded on the map.

Valley Fever (Coccidioidomycosisis) is a fungal infection that is native to the southwestern U.S.. A common misconception in Arizona is that Valley Fever is named for our own Valley of the Sun. The name is actually derived from an outbreak in the San Joaquin River Valley in California that affected farm workers. The fungus is contracted by inhaling spores from the dust and dirt.

It’s not just a threat to dogs and humans; many species can contract the disease. But while we are all exposed to Valley Fever, that does not mean we will all start showing symptoms. The amount of exposure, the health of the individual’s immune system, and contributing factors such as monsoon winds, recent/nearby construction/digging all play a roll as well.

People who work outdoors, pets that live outdoors, or pets that enjoy digging in the dirt, are at a higher risk because of the increased exposure to the dust and dirt that contain the fungal spores.

It is estimated that 60 percent of animals and people that become infected with this fungus never get sick. It is only when antibodies indicating past infection show up on a blood test that the infection is discovered. But the other 40 percent do get sick.*

What are the Symptoms of Valley Fever? 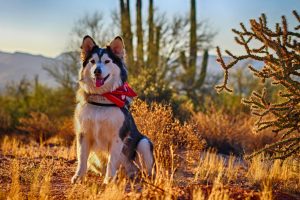 As I mentioned, people/animals contract the fungus by inhaling spores from dust and dirt. In humans, the most common presentations are upper respiratory symptoms – people think they have the cold/flu that just won’t go away. It only takes one to three weeks from the inhalation of fungal spores before coughing starts. However, the fungus can go anywhere in the body; where it goes will determine what symptoms are seen. Fever, weight loss, and appetite loss accompany the cough, which can be dry or productive.

In dogs, some of the common presentations we see are lethargy, limping, coughing, vomiting/diarrhea, fever, non-healing skin lesions, and sometimes even seizures. It is not as common to see Valley Fever in cats, but it can happen. Either they are not brought in to a veterinarian with the symptoms, or they may be mis-diagnosed with other diseases.

What’s the Cure for Valley Fever?

Unfortunately there is NO prevention and there is NO cure for Valley Fever – there is only treatment! If the illness is limited to the lungs, the prognosis is good. The recovery rate approaches 90 percent with appropriate medication. However, if the fungus escapes the lung and travels out elsewhere in the body, the infection is said to have disseminated. This is a much more serious condition.

What is the Treatment for Valley Fever?

Treatment consists of anti-fungal medication taken orally twice daily for a minimum of one year, or possibly for life. Some animals do well, and their immune system helps manage it, while others relapse when you try to take them off of their medications.

Other treatment involves managing the symptoms that the pet presented with; symptoms caused by Valley Fever.  Your pet may need anti-inflammatories, anti-nausea medication, topical treatment for skin lesions, anti-seizure medication for seizures, and so on. A small percentage of pets do not respond to treatment, and this has to be discussed with their owners, but overall, it is rewarding to treat. Many pets can live a long, good quality life with Valley Fever.

There are several diagnostics that can be helpful with this condition.

I currently have a Valley Fever case that is pretty severe. A 1.5yr old cattle dog; an intact female that had three dead puppies six weeks ago. The owner did not know that the dog was pregnant. Having to work 12-14 hours a day, they were unable to keep the female indoors, away from an intact male.

She has a VERY high titer.  What is titer you ask? It’s a number that denotes the level of infection; some animals and people with low titer numbers are very sick, while others with high titers are okay. It is very individual, so I do not just look at numbers – I look at the overall condition of the animal.

We are treating her to see if she will respond/recover. This female is only 60% of the weight she should be; she has bone lesions on her left elbow and her right foreleg. She is back in-heat and mildly anemic; she has been dehydrated, feverish, has conjunctivitis, and had bloody diarrhea. This poor girl is still lethargic, but she is improving. She is showing slow, small improvements under treatment; she is responding day by day and we hope for the best. Once she is well enough she will be spayed.

This sad story, hopefully with a happy ending to come, just shows you what a pet can go through with Valley Fever; unfortunately it’s something we see often.

This website uses cookies to improve your experience while you navigate through the website. Out of these, the cookies that are categorized as necessary are stored on your browser as they are essential for the working of basic functionalities of the website. We also use third-party cookies that help us analyze and understand how you use this website. These cookies will be stored in your browser only with your consent. You also have the option to opt-out of these cookies. But opting out of some of these cookies may affect your browsing experience.
Necessary Always Enabled
Necessary cookies are absolutely essential for the website to function properly. This category only includes cookies that ensures basic functionalities and security features of the website. These cookies do not store any personal information.
Non-necessary
Any cookies that may not be particularly necessary for the website to function and is used specifically to collect user personal data via analytics, ads, other embedded contents are termed as non-necessary cookies. It is mandatory to procure user consent prior to running these cookies on your website.
SAVE & ACCEPT