I wrote “you probably know these stats” because breast cancer is possibly the most widely publicized cancer in the country. There are widespread breast cancer awareness campaigns, and ongoing research. But did you know that the prevalence of mammary cancer in adult intact female dogs is even higher than that?

Mammary cancer is very common in dogs, especially those that are not spayed or neutered. It’s more common in females than males, in fact one in four unspayed bitches is affected. Mammary tumors are a very widespread issue, but owners of female dogs just aren’t aware of the risk. Unfortunately I have seen quite a few cases lately.

If female puppies are spayed before their first heat cycle, it almost eliminates their risk of mammary cancer completely. A study of the incidence of canine mammary tumors showed that tumors occurred in 0.05% of females spayed before the first heat cycle. This incidence increased to 8% or 26% when the animals were spayed after the first or second heat. If the animal was spayed after this period of time, the risk of developing mammary cancer was the same as for an unspayed bitch.**

There are, of course, people that want to breed their bitches or not spay until they are fully grown because they are a large, or giant breed dog. But these statistics show that this is a decision that needs to be discussed with your vet to decide the best course of action for your pet. To avoid the chance of your female contracting mammary cancer have her spayed preferably before her first, but definitely after her second heat cycle.

When & How to Check Your Dog for Mammary Tumors

Mammary cancer is most commonly diagnosed in adult female dogs aged 9 to 12 years old, followed by 5 to 8-year-old females. Pure breeds accounted for 80% of submissions in the study. The Poodle, Cocker Spaniel and German Shepherd breeds were consistently affected.** 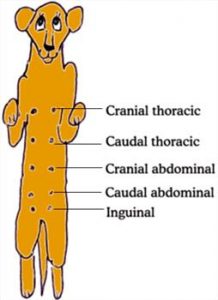 But when should you begin to check your female dog for growths? Always keep an eye out for unusual lumps. Report anything unusual to your vet as soon as you find something. But start actively checking when your female is 6 years old. This includes both unspayed female dogs and female dogs that were spayed as adults.

Unfamiliar with the normal mammary anatomy of the female dog? Here’s a quick lesson. You will find five sets of mammary glands as shown, though the average female dog has only nine. Normal glands should be soft and pliant, especially towards the rear legs. There should be no firm lumps. If a lump is detected, see your veterinarian at once regarding possible removal. Most tumors occur in the glands nearest the rear legs.***

You can find more detailed and very useful information on mammary tumors in dogs using this link to the Veterinary Partner website. But if you have any concerns, or find any unusual lumps on your pet, call 480.774.6995 to schedule a mobile vet or clinic appointment with Compassionate Animal Care today.

This website uses cookies to improve your experience while you navigate through the website. Out of these, the cookies that are categorized as necessary are stored on your browser as they are essential for the working of basic functionalities of the website. We also use third-party cookies that help us analyze and understand how you use this website. These cookies will be stored in your browser only with your consent. You also have the option to opt-out of these cookies. But opting out of some of these cookies may affect your browsing experience.
Necessary Always Enabled
Necessary cookies are absolutely essential for the website to function properly. This category only includes cookies that ensures basic functionalities and security features of the website. These cookies do not store any personal information.
Non-necessary
Any cookies that may not be particularly necessary for the website to function and is used specifically to collect user personal data via analytics, ads, other embedded contents are termed as non-necessary cookies. It is mandatory to procure user consent prior to running these cookies on your website.
SAVE & ACCEPT